So we just have a few days left in the Warbirds campaign, and we just breached $4000 (woot!). While all of this amazing fund raising has been going on, we have been playtesting the game and Cait and I are almost done the final re-write before we send the whole thing to our copy-editor to get rehashed one more time. After all the playtesting, the final rewrite is changing things I never thought to change and fine-tuning the game in some very awesome ways. So lets talk about some of these changes.

That is not a misspelling of thatch. Admiral John S. Thach was an American naval aviator during WWII, and one of the best aerial tacticians in history. The Thach Weave was a defensive tactic that he devised that allowed the aerodynamically inferior F4F Wildcats of the US navy to fend off attacks from Japanese Zeros. It required two wingmen to fly together in a weaving motion that protected both from trailing enemies.

I really wanted to fit the Weave into the Warbirds ruleset, but we already had a mechanic for fighters working together, and it seemed to overcomplicate things. I finally figured it out just a few days ago, and added it to our Advanced Stunt list. This makes it an optional move, but one with huge benefits when employed correctly. The text reads like this:

The Rapidfire system has never had a very long skill list. We try to keep it short and simple. For Warbirds, though, we had to change a few things. The first thing was adding the 4 skills for when characters are in their planes. Those were pretty easy and obvious. What was less obvious is what we needed for characters out of their planes. It took a lot of playtesting to see where the skill list fell short, and where we had too much.

For those of you familiar with the ruleset, there will be some differences. First, There are a lot fewer personal combat skills. Everything is covered with just Close Combat, Shooting, and Athletics. We dropped Archery/Throwing, Unarmed Combat and Dodge. We collapsed the skills down so that players would have less to deal with if they want to be good at combat, and still have skill points left over to diversify.We also collapsed all of the science skills (Sciences, Social Sciences, History) down to the single skill "Academics". It makes it easier to be an educated character, and, as above, have a diversified character.

We also added and expanded skills, especially those that deal with social situations. There is now Persuade and Publicity to help characters deal with their adoring fans, and we added Mechanics, of course, so characters can modify their planes. The functions of other skills has changed slightly, all in the service of making the game smoother, faster, and more run.

There are all sorts of other tweaks and alterations being made to the manuscript, but we are almost finished with the final re-write. I can't cover them all here, but the book is going to be awesome when it's done.

I am incredibly excited about our campaign, and where things are going. We are creeping ever closer to the $5000 stretch goal, and we just might make it.

Credit Where Credit is Due

We just got a massive donation from my old friend Chris, and now the book is going to be in colour. So huge props to Chris, but that's not what this post is about.

I haven't been giving enough credit to my wife and co-designer on this project, Cait. I've mentioned before that collaborating is hard for me, and I continue to struggle with it, but the results that Cait and I get when we work together are so much better than what I can make alone that it is always worth the effort.

So how does collaboration work? Well, we brainstormed the setting together, I wanted islands in the sky, and Cait came up with the idea of using the Caribbean. The rules were mostly my purview, but when we needed something to give the game a unique spin, Cait came up with the Fame system.

In terms of writing, Cait wrote a lot of the country info, and re-wrote sections of the book where I let the topics get away from me. She has a talent for communicating clearly and concisely, and can take something that I take 20 words to say and cut it down to 8 (and those 8 words will be better than my 20). She is also in charge of structure and layout, and even determines things like chapter order, and the order of subjects in each chapter (we've been using her character creation step by step process for 3 books now)

Outside of the book itself, she helps manage our website and Facebook page, and most importantly, she vettes pretty much anything I say on behalf of the company. Any time anyone reads a forum post by me, chances are it has Cait's touch on it. She even coaches me on how to run our playtests (they're getting better, I swear!).

She helps shoot and edit our videos and she will be starring in the next two. And she just spent the last 4 hours building our art commission list with me for our artist.

Thank you Cait.
I love you, even when you're mad at me for accidentally a word.
Posted by Unknown at 23:53 No comments:

I have heard it said that playtester is worst job in the video games industry. I give you this comic as non-scientific, non-empirical, purely anecdotal evidence:

Fortunately, I am not in the video games business. Working with table-top RPGs makes playtesting a lot more fun and responsive. To test the game I run it, see how it works, note things that need to be fixed, and get player feedback. If there is a broken mechanic, then we fix it on the fly. If there a problem with the setting, then we hash it out then and there. It's a lot like making a home-brew game, but you keep better notes.

We've been testing Warbirds quite a bit lately, and now we are getting down to the nitty-gritty details. The core mechanics are pretty much locked down. Hell, the Rapidfire core mechanic got locked down when Q and I hashed it out over a couple of weeks back in the fall of 2006. The dogfighting rules are actually older, and date back to some arguments with my buddy Kirk that we had back in the 90's. The Strafing rules are quite a bit younger, but the mechanics were figured out long before I began writing.

What the playtest does is test rules modifications, and all of the various tweaks and special options. I have always said that Rapidfire is not a "generic" system, but more of a framework that can be endlessly modified to fit different genres and play styles. For Warbirds the biggest modifiers to the basic system are the reduced lethality rules, and the addition of Fame. Scaling back lethality meant my players were able to get into a firefight with a bunch of gangsters (who were kidnapping people off an airship) without me worrying about a PC dying on the first shot. The use of Fame as wealth led to an interesting negotiation where a character wanted a lockpick kit, but couldn't get the money together. That kit would have come in very handy later.

I also like to think that we are constantly adding little improvements to the ruleset. For those of you that are familiar with our other games, we've been adding little mods here and there that can make a big difference. The skill list is much more explicit in terms of how the skills are used, and giving difficulty examples. The advantages and disadvantages are expanded, include more precise descriptions, more rules effects, and the GM section talks about awarding and removing them.

The best part about testing the game is getting together with family and friends and having a good game. If you look close you can see our prototype GM screen. 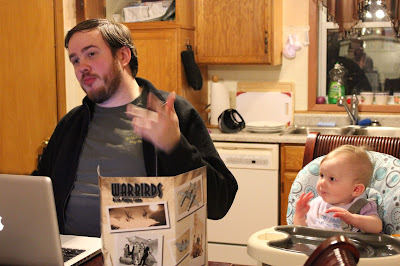 Alanna is showing how the planes are flying with her hands.

We have two weeks left in the Indiegogo campaign, and we are at $2432. We are just over $500 away from making the book with a colour interior.

Let's see if we can get there.